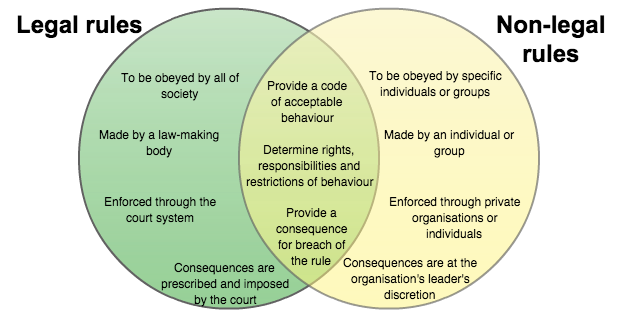 Rules are principles that guide our behaviour. They can derive their authority from the law (made by parliament or the courts), or by an organisation or cultural expectation. Legal rules apply to everybody and the State provides a mechanism to enforce them.

Non-legal rules, when made by an organisation, only apply to people within that organisation. A society may enforce cultural norms through its media and individual people’s behaviour.

For example, a golf club may require its members to wear a certain colour of pants, and prevent its members from entering the club if they are not wearing the right coloured pants. The popular, fashion-forward girls in an American high school may laugh and turn their back on a girl wearing white pants after Labor Day, discouraging her from wearing them in future (deterrence). However, there is no legal rule about the colour of your pants, so nobody can sue you or report you to the police for that.

Whilst not strictly relevant right now, it is useful to keep in mind that there are different types of legal rules. Legal rules can be characterised in the following ways:

The image above illustrates the similarities and differences between legal and non-legal rules.

wbadmin August 23, 2015 Legal Rules, Non-legal Rules Arbitration No Comments »
Be a Red Apple and surround yourself with Red Apples and don’t mind the Green Apples
Law under the Feudal System.