2009, Honored and named as Microsoft’s Canadian Innovator Program, where Canadian men and women are using technology to create breakthroughs that benefit people across the country. 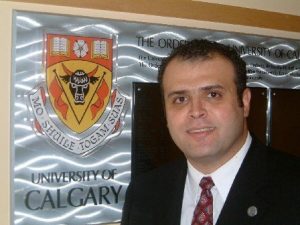 Dr. Wael Badawy, CEO of Calgary-based IntelliView Technologies Inc. has been cited by Microsoft for its Canadian Innovator Award. This is a great honour bestowed on Canadian men and women that are using technology to create breakthroughs that benefit people across the country.

Dr. Badawy has been a leading researcher in video technology who’s passion for research and development led him from Egypt to the U.S. and then to Canada where he established a leading video research lab at the University of Calgary. There he incubated a unique software and hardware solution that transforms passive video cameras into video sensors. The easy to use system lets customers assign alerts to each camera and once the alarm is triggered, it sends out a real-time JPEG notification to smart phones, monitoring stations or third party monitoring companies.

The solution was created by a team of Phds that have created a patented solution that is housed inside a product known as a SmrtDVR. This box sits on the site to record and analyze the images it is seeing to determine if an event is occurring that will trigger an alarm. Users can define and change with a click of the mouse up to 10 alerts per camera as well as audio alerts. Since the system is on site and send event notifications only, it has minimal bandwidth, communications and power requirements. It can work with any camera and can communicate through cellular, satellite or radio networks. It has minimal power requirements and can be green powered using solar, wind as well as fuel cells.

The IntelliView solution is easy to deploy, is portable and expandable with minimal monthly operating costs. It can be used in a wide range of security and surveillance solutions across various industries including oil and gas, construction, health care, and airports. Many more applications are evolving for this video surveillance technology which is why Microsoft has cited Dr. Badawy for the Canadian Innovator Award.