2010, Honored with the Distinguished Professional Awards by Immigrant Services Calgary. 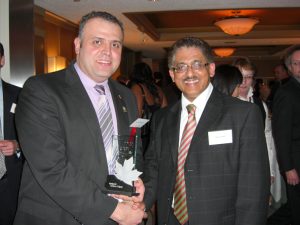 “It is an honour to receive an award for my professional accomplishments as a leader of a technology-based company that is successfully commercializing a video surveillance solution. It has been a long journey full of challenges but this has been a very rewarding experience,” Badawy says.

The Distinguished Professional Award is presented to an immigrant who has achieved success in a professional career path.

Next time you enter a building or premises in Calgary with video cameras hoisted and recording happenings at the place think of the vision of Calgary resident Wael Badawy. Following his passion for video analytics and related research, Dr. Badawy embarked on a long journey from his alma mater at the University of Alexandria in Egypt, moving to Canada in 1997, after he was accepted into Concordia University in Montreal for an M.Sc in Computer Engineering and then transferred to the University of Louisiana.

Upon the completion of his PhD in Computer Engineering in the field of video compression and architecture, he joined the University of Calgary in 2000. At the U of C, Dr. Badawy is credited with helping to found the Lab for Integrated Video Systems. Later the lab led to the creation of IntelliView Technologies Inc., which has spearheaded video surveillance technology in Canada and abroad.

Dr. Badawy says, “I believe technology should improve the everyday lives of Canadians. If I can reduce stress and give people a sense of security then, I feel I have made a difference.” Peter Hacket, a Fellow of the National Institute of Nanotechnology and professor in the School of Business at the University of Alberta, notes; “I have known Dr. Badawy in my role as President and CEO of Alberta Ingenuity Fund as a Professor at the University of Calgary and CEO of IntelliView Technologies Inc. His students and company have won a number of Alberta Ingenuity’s competitive grants and awards. He has also contributed greatly to the Alberta research and innovation community at large through his participation in a variety of consultations and initiatives.”

As a testimony to the spirit of Canada, IntelliView employs more than 20 professionals from a wide array of backgrounds with a shared passion for video software and securities. Dr. Badawy is married to Ghada and they have three young boys.