Close beside the cathedral of St. Mark stands the square Campanile, the most prominent feature in all Venetian views. Standing 325 feet high, the Campanile always dominated the picturesque low stretch of Venice’s skyline and gave a peculiar distinction to the whole scene. It seemed indeed to many Venetians and to lovers of Venice all over the world that the city had lost its crowning feature when, in 1902, the Campanile collapsed. It was originally erected in 900 and rebuilt in 1329. After it had fallen Venice seemed maimed, and the hearts of thousands felt the depression until the tower was rebuilt and the city could once again hold up its beautiful head. A new tower was built by Piacentini (pee´-ah-chen-tee´-nee) during the years 1905 to 1911, and on completion it was consecrated with most impressive ceremonies. 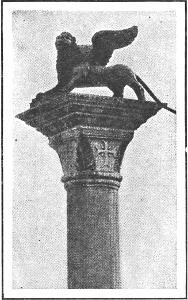 The Doge’s Palace was originally founded about 800; but was destroyed by fire five times, and each time rebuilt on a grander scale. The older part of the present edifice was built in 1309; while the west wing, facing on the piazzetta, was built between 1424 and 1438 by the celebrated architects Buon, father and son.

In gazing at the Doge’s Palace the eye is first caught by the upper arcade. From there the sentences of the “Council of Ten” were pronounced—listened to by the assembled people in silence and in awe. 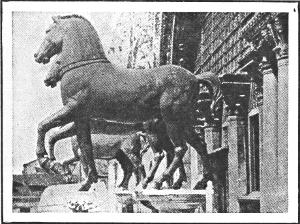 THE BRONZE HORSES OF ST. MARK’S

These horses are among the finest of ancient bronzes. They probably once adorned the triumphal arch of Nero, emperor of Rome.

The columns of this arcade are most beautiful, and have been pointed to with pride for years. Ruskin describes the detail of the sculptured columns, and declares that they are the finest of their kind in Europe. The interior of the Doge’s Palace is wonderful. Tintoretto’s painting of “Paradise” is there, a marvel in size and in detail. The residence of the Doges and the apartment in which the authorities held their meetings are there, revealing still much of their ancient glory. The palace is virtually a museum, and it shows a great display of fine paintings, containing, among others, notably works of Tintoretto, Paul Veronese, (vay-ro-nay´-seh) and Palma Giovane (jo-vah´-neh). Days could be spent profitably wandering through these halls, studying the treasures of art and history to be found there. 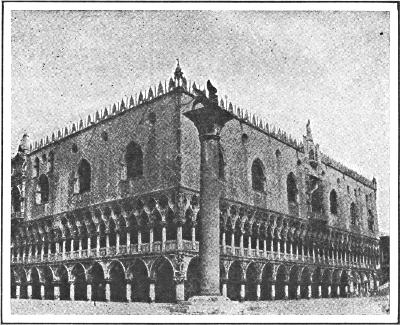 THE PALACE OF THE DOGES

The Doge’s Palace is said to have been founded beside the church of St. Theodore about 800 for the first Doge of Venice. It has been rebuilt and altered many times. 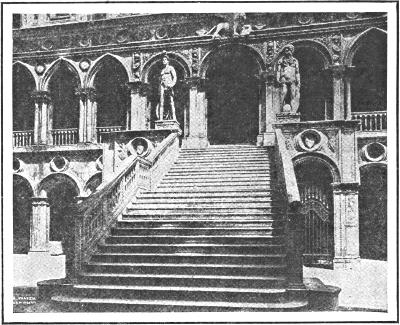 The Stairway of the Giants, so called from the colossal statues of Mars and Neptune at the top, leads to the Palace of the Doges. On the highest landing of these steps, in the later days of the Republic, the Doges were crowned.