It is not the physical conditions alone that make Venice unique. In the beauty and interest of its domestic architecture it ranks before any city in the world. The mosaics of Venice have been famous for centuries, and are today the marvel of all who see them. The spot where Venice has massed the gems of her beauty is St. Mark’s Place. 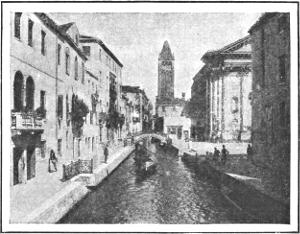 One of the smaller and narrower canals of Venice. 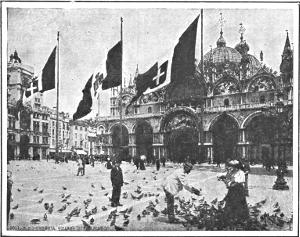 The view of Venice most familiar to stay-at-home bodies is the one to be had from across the water looking at St. Mark’s Place, and including, besides the cathedral of St. Mark, the Doge’s (doje) Palace and Campanile (cam-pa-nee´-le) Tower, and in some cases a glimpse of the Bridge of Sighs. The Piazza of St. Mark is called the “Heart of Venice.” All the life of the city surges there at certain times, then sweeps from there through its various channels. It is gayest on summer evenings, when the population turns out to enjoy the fresh air and listen to the military band. At that time the piazza is brilliant with fashionable people. Go there on a moonlight night, and you will find it a dream of beauty. You must see, of course, the pigeons of St. Mark’s. Flocks of them circle about the square or gather in groups on the pavement, wherever food is to be found. The pigeons of St. Mark’s used to be fed at public expense. It is not necessary now: there are always plenty of travelers that will pay them this pleasant toll for the sake of being photographed in their company. St. Mark’s Place is 191 yards in length, and in width 61 yards on one side and 90 on the other. The beautiful effect of it can hardly be expressed. It is paved with trachyte and marble, and surrounded by buildings that are not only important historically but most interesting architecturally. 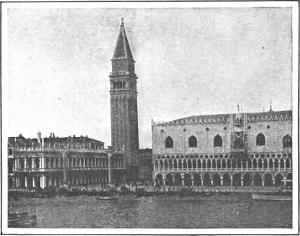 THE RECONSTRUCTED CAMPANILE OF ST. MARK’S

The Church of St. Mark, now a cathedral, was begun in 830. The year before that the bones of St. Mark, the saint of Venice, were brought from Alexandria, and they now lie buried in the church. This marvelous building is Romanesque in style. During the eleventh and twelfth centuries it was remodeled and decorated with most lavish magnificence. In the fifteenth century it received some Gothic additions which enhanced its effect. In such short space as this it is impossible to do justice to the beauty of St. Mark’s. It is best by far to rest on what Ruskin has said in his “Stones of Venice”:

“The effects of St. Mark’s depend not only upon the most delicate sculpture in every part, but eminently on its color also, and that the most subtle, variable, inexpressible color in the world,—the color of glass, of transparent alabaster, of polished marble, and lustrous gold.” 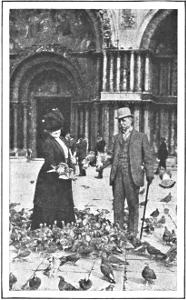 The building is in the form of a Greek cross, with mosaics covering more than 4,500 square feet. Over the upper entrance are four horses in gilded bronze, counted among the finest of ancient bronzes. They may have adorned the triumphal arch of Nero or that of Trajan in Rome. The Emperor Constantine sent them to Constantinople, and from there they were brought by the Doge Dandolo to Venice in 1204. These horses were taken to Paris by Napoleon in 1797, and for awhile crowned a triumphal arch in that city. After Napoleon’s downfall, in 1815, the bronzes were restored to their original place at Venice.

wbadmin September 10, 2015 News No Comments »
PALACE AND CAMPANILE
A Multiplication-Free Algorithm and A Parallel Architecture for Affine Transformation

This website uses cookies to improve your experience while you navigate through the website. Out of these, the cookies that are categorized as necessary are stored on your browser as they are essential for the working of basic functionalities of the website. We also use third-party cookies that help us analyze and understand how you use this website. These cookies will be stored in your browser only with your consent. You also have the option to opt-out of these cookies. But opting out of some of these cookies may affect your browsing experience.
Necessary Always Enabled

Any cookies that may not be particularly necessary for the website to function and is used specifically to collect user personal data via analytics, ads, other embedded contents are termed as non-necessary cookies. It is mandatory to procure user consent prior to running these cookies on your website.