Category: Around the World

HOW IT CAME TO BE

“A Trip Around the World with DWIGHT L. ELMENDORF, Lecturer and Traveler.”

Venice is built on a group of little islands. At a depth of from ten to fifteen feet there is a firm bed of clay; below that a bed of sand or gravel, and then a layer of peat. Artesian wells dug to the depth of sixteen hundred feet have shown a regular succession of these beds. On this base, piles, where they have been used for the foundation, have become petrified. So the city may be described actually as having been built up from the bed of the sea. In its physical aspect it may be summed up by saying that Venice stands on 117 small islands formed by something like 150 canals and joined together by 378 bridges. 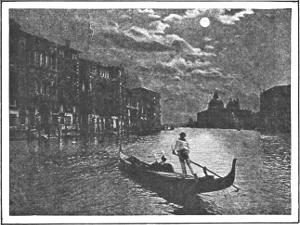 THE GRAND CANAL BY MOONLIGHT

There is but little in the way of sidewalks. Occasional narrow paths of stone skirt the canals; but in many places the water laps the very walls of the buildings, and transportation is to be had only by boat. Of course there are many lanes and passages among the houses; but the general effect is such as would make an impression on the traveler of a city set in the sea, and the people live, move, and have their being on either stone or water. They are strangers to groves, shady lanes, and country places. Some of the inhabitants of Venice have never seen a horse or a cow. 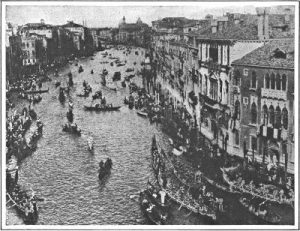 These black-painted craft take the place of cabs in Venice. They are propelled by a gondolier, who stands at the rear.

The city is divided into two parts by the Grand Canal, which is nearly two miles in length and varies from 100 to 200 feet in width. It makes a fine curve like the letter S, and by this it displays to advantage the magnificent residences that line it. There on its gleaming surface are to be seen the brilliant pageants of the city,—gondolas and autoboats in great number, gay parties, chatting and laughing and tossing flowers, and the whole stretch a blaze of intoxicating color. Some of the most attractive views of Venice are to be had not from within the canal, but from some point out in the lagoon. Your map of Venice will show you the city not literally situated in the Adriatic Sea, but located within the lagoon and protected from the outer sea by long sand hills strengthened by bulwarks of masonry. From the strip to the mainland, across the lagoon, where Venice is situated, the distance is about five miles, and in this stretch of water you will see many striped posts called “pali.” These mark the navigable channels about the city. 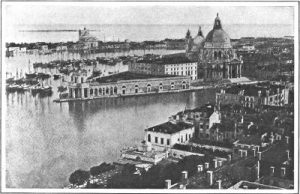 VENICE AND THE ADRIATIC SEA

A panorama of the beautiful “Island City.”

wbadmin September 9, 2015 Around the World No Comments »